Tirana is the capital and the largest city of Albania. Modern Tirana was founded as an  Ottoman town in 1614 by Sulejman Bargjini. Tirana became Albania's capital city in 1920 and is the center of the political, economical, and cultural life of the country. The Municipality of Tirana is located at (41.33°N, 19.82°E).

Tirana''s average altitude is 110 meters (360 ft) above sea level and its highest point measures 1,828 m (5,997.38 ft)  at Mali me Gropa. The city is mostly surrounded by hills, with Dajti Mountain on the East and a slight valley opening on the North-West overlooking the Adriatic Sea in the distance. Tirana is on the same parallel as Naples, Madrid, Istanbul, and New York, and on the  same meridian as Budapest and Krak. 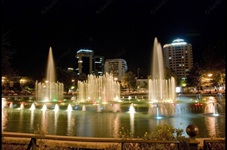 The main cultural institutions of Tirana are the National Theater, the National Theatre of Opera and Ballet of Albania, and the National Arts Gallery (Galeria Kombetare e Arteve). Performances of renown world composers are regularly performed by the Symphonic Orchestra of the Albanian Radio and Television. The city serves as a regular venue for the Tirana Biennale, Tirana Jazz Festival, Summer Day, Rally Albania, and Tirana Fashion Week. Recently, Tirana has been redesigning its identity to a more Mediterranean city full of cafes and a vibrant nightlife.

Tirana is trying to improve its tourism potential by reconstructing important landmarks.
The town is home to the following historical sites: 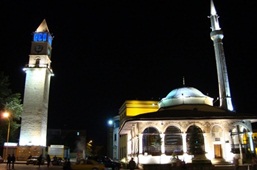 Regarding transport, municipal, national and international transport links have developed over recent years as demand has increased. The city serves as the meeting point for national roads SH1, SH2 and SH3.

Local transport within Tirana is by bus or taxi. Coach and minibus (furgon) services also run, according to demand, to the coast and northern and southern Albania from different locations in Tirana. International coach services connect to Greece, via Korc or Kakavije, to Kosovo or Serbia via the new Durres-Morine highway, and to the Republic of Macedonia or Bulgaria via Struga.

Tirana is served by the port of Durres, that is 36 km distant from the capital. Passenger ferries from Durres sail to Trieste, Ancona, Otranto, Brindisi, Bari, Genoa (Italy), Zadar, Dubrovnik (Croatia), Koper (Slovenia), Bar (Montenegro), Corfu (Greece) and others. Kavaja is Included in the Tirana County too. 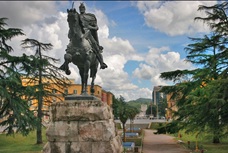